Can We Turn Boston Red Sox into Zombies? 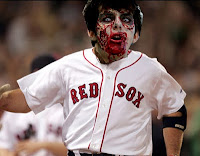 Dear Rich: I have come up with a couple of designs that depict the Red Sox baseball team as zombies, and before I start trying to sell them online, there are several points regarding Fair Use as parody that I am concerned about. First, is the use of the team's name at all permissable? My design's currently show the name "Red Sox" in a generic font, but the word "Red" is covered by the word "Undead", changing the term to "Undead Sox". The "Red" is still discernable. Is it necessary for me to remove the "Red" entirely? Second, I use modified versions of two logos. The Red Sox's Hanging Sox logo -- my version is an original drawing that includes a dismembered zombie foot in on of the socks, with several toes poking through a hole in the end of the sock. Also, the MLB logo has been modified to replace the baseball player silhouette with a zombie. Thus, both logos have been modifed from the original so that they are unique but clearly reference the original. Is that protected as parody under fair use laws? Third, I use a modified version of the MLB name. In my artwork, it is altered to read Major League Zombies or MLZ. Again, is this permitted as parody? Short answer dept. If your concept is successful, you'll probably get sued by the MLB. If you can afford to defend the lawsuit, you might win; then again, you might not.
Trademark parodies. What you need to keep in mind is that you're dealing with trademark parodies, not copyright parodies so the copyright concept of "fair use" isn't really relevant (and we're not going to address trademark fair use which is an entirely different animal.) Here's a previous post on the subject and here's a good explanation of the trademark parody rules. Keep in mind that to create a true trademark parody, you must convey contradictory messages: you want people to think of the MLB, but you also want people to see your use as a parody that's not connected with the MLB (Chilling Effects elaborates on that distinction here -- scroll down for the explanation).
Why will you get sued? Famous companies typically sue over parodies under a trademark theory known as dilution. When you dilute, people think less of the mark because you've tarnished its famous reputation. Even if a company believes you have a good free speech defense, the company may proceed with the lawsuit because it has more money to spend on the lawsuit and is more likely to force you into a settlement. If we were to analogize to the world of zombies, the MLB lawyers will want to devour your grey matter.
Posted by The Dear Rich Staff at 6:00 AM