Wants to Use Magazine Imagery in Book 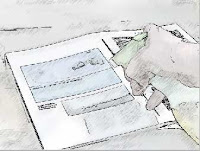 Dear Rich: I am writing a book about an art technique using a national magazine. I can illustrate the process using the magazine without actually showing any of it's actual images, (see picture) but I must use the name as it is the only magazine that will work with this process. I have contacted the company and so far no one has been able to help me. The other product that I use has given me permission and is going so far as to help me promote the book because it will help them. This would also be the case with the magazine. I will be adding value rather than compromising it. I will list them in my sources. Would this be considered fair use? Do I need to have their permission to use their name? This reminds us of when our cousin Andrew used to paste rubber cement on a piece of wood and then apply rubber cement to a magazine picture and press them together after they dried (and I think he ran water over it until the paper washed off). He ended up with a piece of wood with an image on it, except you could see the wood grain, too. Kind of an old-timey look. He priced them at $50 or $100. We were about 13 at the time and that seemed a lot to charge for something you made with rubber cement. He told me, "If you don't charge a lot, people won't take it seriously." He was so young to know that.
Right, you had a question. We think you will be fine using the name of your magazine within your book. That's a trademark issue not a copyright issue and editorial uses of trademarks -- for example, talking about a magazine in a how-to book -- does not require permission. A conservative approach would also be to add a disclaimer at the front of the book to the effect that you and your publisher have no association with the magazine and that all rights in the magazine vest in the magazine owner. If you use imagery from the magazine, you'll trigger copyright issues and probably need permission either from the magazine or, if the magazine doesn't own the rights, from the photographer or designer who created the materials you're using. We think selective uses of the magazine in the context of a crafts project would likely be excused as a fair use since it is clearly a transformative use, but as Dear Rich readers know, fair use is just another word for a lawsuit, because that's often the only way you can prove fair use rights. As for the fact that your book adds value to the magazine, that may or may not be true, but it probably won't have much effect on your claim of fair use.
Posted by The Dear Rich Staff at 6:00 AM

Thank you so much for answering my question. The magazine did call me and requested images and more questions about my process. I emailed all of this to them, but they haven't responded to this information.
I wish I was a wise as your cousin about pricing my art. Maybe I wouldn't be writing a book, but painting more!

please keep painting whether you make money or not. That's such a great art form.