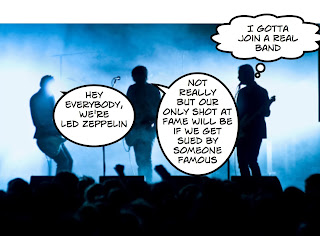 Dear Rich: I just received an email today regarding a copyright/trademark infringement from an international source -- a band in England claiming to have an international registration for the a band name similar to our band (a local band in WI playing shows). To me it seems like a scam but a trademark search does reveal the registration. I know there are many other bands with a similar name in and around the country. Is this for real? What's my course of action? The British band has a valid U.S. trademark registration for a design mark --  a combination of the band name and an image. That gives it a leg up in any trademark battles because registration creates a nationwide presumption of priority -- that is, a presumption that the band was the first user of the name and that your subsequent use is likely to confuse the British band's fans. That's a presumption that you may be able to overcome. The fact that there are many bands with similar names may benefit your band if you can demonstrate that these bands have coexisted without any fan confusion -- that is, nobody has shown up at the gigs disappointed that they weren't seeing the band from Britain.
How far will they take it? Of course, sending out a threatening email doesn't cost anything. But hiring an American attorney and pursuing the claim may be too expensive for the British band. You may want to research the British band's business -- Are they signed to a label? Are they touring in the U.S.? Have you Googled "[band name] lawsuits"? It's possible that you may assess the risk as blue or green, not orange or yellow. On the other hand, knowing there are so many bands with similar names may prompt you to change yours.