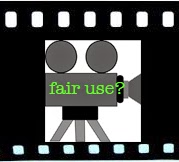 Dear Rich: We are in post-production on a documentary in which we use two campaign ads and limited news footage. One of the ads is an attack ad on one of our character (subjects) from 1996. We use about :20 of a :30 piece. Our character is in favor of using it as it demonstrates an outrageous lie against her and provides historical evidence of slander in political campaigns of the '90s. The other ad depicts one of the characters in his 2011 special election campaign. The ad is ironic and received a lot of criticism when it came out. Currently, we use a few seconds of it in slow-mo as a backdrop for text to describe his current efforts to limit regulatory over site, so we feel that the image and text are related; the ad helps to illustrate the point. However, in our long piece, we would like to show more of it. There are probably two different rulings that would be drawn, but we'd appreciate your input on that. In addition, we have a couple of seconds of stories from a variety of news sources used to illustrate coverage - or lack of coverage of specific events. Currently, we are using no more than 4 seconds of any news clip. Much of the voice is covered up with our own BRoll, but Sawyer and Jennings are both on camera for a moment before cutting away. If you are asking whether you will be embroiled in a lawsuit over these issues, we couldn't say. We do know that when politicians get mad over ads, they often lawyer-up (see our recent post).
Fair use? If you're asking whether we think you will prevail in a lawsuit based on a fair use defense, the meter probably leans more toward your side than towards the copyright owners. That's because -- analyzing the four four fair use factors -- your segments are relatively short (the shorter the better), your use of the material is clearly for the purposes of commentary, and your project doesn't seem likely to have an effect on the potential market for the copyrighted works. As always, this is only speculation and the costs of fair use litigation may overwhelm principles of free speech.
P.S. Dept. If you're planning on posting your documentary online, keep in mind that copyright owners can use DMCA notices to wreak havoc.
Posted by The Dear Rich Staff at 6:00 AM