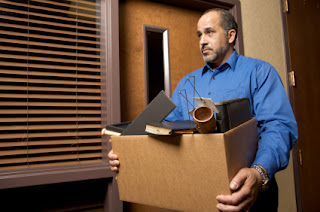 Dear Rich: Can an employer in California require an ex-employee to disclose all inventions created after the employment has ended. I've been asked to sign an agreement that requires me to disclose all inventions I create even for a year after I leave the company? The Dear Rich Staff is always fascinated by post-termination provisions. Yes, they are usually insidious, over-reaching, poorly drafted, and a desperate attempt to assert control by the legal-capitalist puppet-masters. But there's also an element of hopefulness to them. After all the employer sees some kind of future for you. So, when you get that call from the HR department and you start to see pink, remember that the employer who is about to end your career also has enough faith in you to pursue you for months after you've cleaned out your desk.
Right, you had a question. We can't say for sure whether your post-termination clause is enforceable but we can give you some background. California's Labor Code Secs. 2870-72 sets the rules for some invention disclosures. That law prohibits the employer from claiming rights to inventions you create on your own time with your own supplies and equipment. It also permits an employer to require employee disclosures of all inventions created during the course of employment. Unfortunately, it doesn't say anything about disclosures made after employment is terminated.
Two cases that shed a little light. In a 2006 case, STMicroelectronics v. Harari, a federal court indicated that California's disclosure requirements could be construed broadly for purposes of protecting an employer's trade secrets (although it didn't specifically address post-termination provisions.) In Yield Dynamics v. Tea Systems, a California Court of Appeal looked at a post-termination disclosure and ruled that an ex-employee had honored it. Again, the court didn't specifically address whether such clauses are always enforceable.
California policy. We think that a California court will consider it unenforceable if the provision is primarily being used as a means of preventing you from competing (that is, like a noncompetition clause). If a court considers it as a legitimate attempt by the employer to preserve company trade secrets, it is more likely to be enforced. The factors that are likely to tip the decision are the length of the provision (generally the longer, the less enforceable), the industry, or category of technology or invention involved (in some industries such as high-tech, trade secrets are short-lived), and the relative behavior of the parties (for example, it would be less enforceable if the employer customarily uses this provision to hassle ex-employees). We also think this is something you should make your new employer aware of as you want to avoid disclosing any newly acquired trade secrets. It's also the kind of thing you may want to consider hiring an attorney for an opinion.