Can I use painting of photo for book cover? 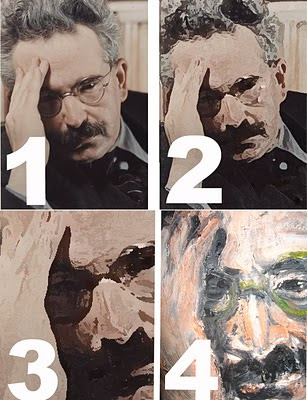 Dear Rich: My mother painted a picture (that I really like) of Walter Benjamin who is the subject of a book I've written. The painting is a cropping from a postcard of a photograph of him looking very angst ridden. The photograph on the postcard is copyrighted from 1938. Do you think it's okay to use the painting as a book cover anyway or should I try to contact the photography studio listed at the back of the postcard (which has a copyright that is presumably more recent)?  We believe that the rights to the photo (No. 1, above) are owned by the Estate of Gisèle Freund/IMEC Images (L’Institut Mémoires de l’édition contemporaine, Paris). (Contact at: imecimages-icono@imec-archives.com or Tél. 02 31 29 37 44). Because Freund, a French citizen, died in 2000, her works are protected for 70 years following her death. (An exception to this rule might be if the photograph was first published in the U.S. and was never renewed. In that case, no permission would be needed for reproductions in the U.S.) Your mother owns the copyright to her painting (No.4, above) although it would be categorized as a derivative work because it is derived from the Freund photo. The two questions you need to examine are whether your mother's work is substantially similar to Freund's (requiring permission) or alternatively, if it is similar, whether reproduction is permitted as a fair use.
Substantial similarity. Art experts may be required to offer opinions on the issue of similarity but often it comes down to a judge or jury's lay opinion (the "ordinary observer" test) as to whether enough of Freund's work was taken to be considered a "misappropriation." (Of course, Freund's estate does not own a copyright on Benjamin's face; but it does claim rights to her expression of it.) We can't predict this issue, but we think there is enough similarity for the Freund estate to drag you into court.
Fair use and paintings of photos. Thanks to the AP/Shepard Fairey case, many people are aware that copyright owners can raise a stink when their photos are turned into paintings. That case appears to have settled and the leading case on art reproductions of photos remains Rogers v. Koons, a 1992 case in which a court ruled that Jeff Koons' arty reproductions of a photo of a couple holding puppies was not considered a fair use. (You can compare the two works here.) Again, the Estate has enough of a claim to get take you to court.
What about transformative uses? Two years after the Koons case, the Supreme Court recast fair use in Campbell v. Acuff  by emphasizing that the "transformative" nature of the derivative work is the most important factor to consider when making fair use judgments. So the rules are a little different in a post-Campbell  world. Others have prevailed in comparative art-to-art situations using a parody defense, and even Koons prevailed using a fair use defense in a more recent case. In another case involving a postage stamp based on a copyrighted war memorial,  the fair use defense did not help.
Does the painting alter the original with new expression, meaning, or message? In our tableau, above, No. 2 does not seem transformative; all that was done was to apply a Photoshop algorithm to the photo that made it look like a painting. In No. 3, we cropped the Photoshop image so it matches your mother's painting and the cropping has an effect that transforms the work somewhat by bringing us "closer" to the subject (removing the hair and suit) and by intensifying the angst, pulling us more into Benjamin's brain (and that's some brain: we love his writing tips). That's still probably not enough to avoid liability. Besides the cropping, your mother (No. 4) has modified the shading under the hand, the colors (the glasses, for example, are green) and Benjamin's head is not as tilted, his eyes looking more at the viewer. There's no doubt she has created a different experience for the viewer than Freund, but the larger question is whether your mother has altered the original with new expression, meaning, or message. We're not sure there's enough to carry the day in court. For that reason we're going to leave this entry open for comments (Readers, do you think it's fair use?).
Your publishing agreement.  To some extent, much of this answer may be unnecessary. If you have signed a publishing agreement it likely requires that you acquire all rights to material that you use in your book. It also probably requires that you pay for (indemnify) any lawsuits. We're guessing you don't want to have to risk that in the event the Freund estate claims your use is not fair.
Posted by The Dear Rich Staff at 6:00 AM