Dear Rich: Our publication is going to publish information about Q-Ships -- merchant ships that were decoy warships used to bring German submarines out in the open, mostly in World War I. Illustrations have been very difficult to find. We have two from the SSHSA archives but the only photo that the author and I can find of a vessel that was involved in the most significant Q-Ship incident is on Wikipedia. It’s a good photo of this World War I ship and it states beneath the photo that the image is in the public domain because the copyright has expired. Under “source” it gives a web address which is all in Russian. Is the Wikipedia declaration that the photo is in the public domain a legitimate one and can we use it? If so, to whom would credit be given? If a source is obscure or unknown, what does one use for credit line? Regardless of your concerns about Wikipedia, we can assure you that any picture of a Q Ship that was published before 1923 (which should cover all the WWI examples) is safely within the public domain.As for Wikipedia, the site typically provides public domain pedigree for its imagery.


For example, in the case of the photo of the Q Ship, used above, the Wikipedia page explains the origins as follows: "This artistic work created by the United Kingdom Government is in the public domain. This is because it is one of the following:
Is Wikipedia trustworthy? You'll have to make that call yourself but we tend to find that the information is accurate. And if it makes you feel any more secure, Wikipedia has made its way into many court decisions, and  the Trademark Trial and Appeals Board (TTAB) accepts corroborated evidence from Wikipedia as admissible in its hearings. In any case, even if the Wikipedia claims prove inaccurate, you have a decent claim (which can limit any damages from infringement) that you researched and relied on Wikipedia in good faith before proceeding.
Have you checked other public domain sources?  In case you haven't already checked it out, you may want to search through U.S. Government resources at the National Archives. For example, we found public domain footage, of a Q Ship available from this (or this) as well as formerly classified documents about Q-Ships. (You can navigate the types of media pretty easily at this site; the controls and filters are usually on the navigation bar on the left.) 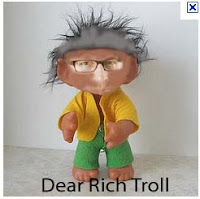 Back to the trolls. Thanks to everyone for their kind support and comments on our recent troll posting. The little people appreciate it.
Posted by The Dear Rich Staff at 8:41 AM