What is SOPA and Should I Care? 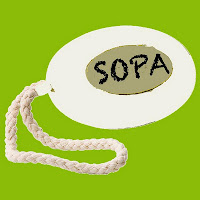 Dear Rich: The web's buzzin about SOPA. Are you going to do a post about it? What's your opinion? The Stop Online Piracy Act (SOPA) comprises two distinct pieces of legislation (one awaiting a vote in the House and the other already passed in the Senate) that will need to be conformed. The legislation would enable the Department of Justice (or private parties) to "blockade" pirate sites outside U.S. jurisdiction by cutting them off from search engine results and AdSense revenue, among other things. The legislation has triggered a battle between content providers -- frustrated that they can't shut down rogue pirate movie, software, ebook, and music sites  outside U.S. jurisdiction -- and content aggregators who are concerned that the broad language in the legislation would remove the safe harbors of the DMCA and make non-pirate sites (such as Yahoo, Flickr and Scribd) liable for infringement. Opponents are also concerned that SOPA will diminish investment, cause revenue losses, create unnecessary legal expenses, and send jobs overseas. (Similar arguments were made in the battle over "patent reform"). As with the DMCA, those who pursue infringers based on misrepresentations are liable for damages and attorney fees.
Will it pass? Surprisingly, for a Congress that can't seem to get traction on crucial national issues, the SOPA legislation has remarkable cross-party support and is expected to pass the House. The president is reportedly in favor of the legislation while vice-president Biden appears to be opposed.  Among those legislators lined up against SOPA are Darrell Issa, Ron Paul, and Nancy Pelosi. (Copyright battles make for strange bedfellows -- remember when Justices Blackmun, Marshall, Powell, and Rehnquist united in their Betamax dissent?)
Cutting off AdSense. Do you wonder why SOPA includes a provision cutting off ad revenue from pirate sites? That's because ad revenue is often the only source of income for the folks who post illegal content. Think about it. How else can they earn money if they're giving away stuff for free?
What's our opinion? Although we are concerned about government injustice and intellectual property (check out this example of stifling innovation), our mission at Dear Rich HQ is to provide practical information that helps readers solve problems. So, we discourage the staff from presenting opinions. Other reasons why we don't have an opinion include:

What do we have an opinion about? We think Terrence Malick's Tree of Life would have been better without all that dinosaur stuff (although others differ).