Can Yoga Moves Be Copyrighted? 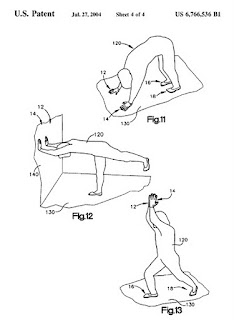 Dear Rich: I've been following the Bikram Yoga stories and it's still not clear to me. Can I practice Bikram Yoga techniques at my studio or will I get sued by the Bikram people? The jury is still out on the case you're discussing in which Bikram founder Bikram Choudhury sued a former Bikram practitioner who started a competing "hot yoga" school (Yoga To The People or "YTTP") for copyright and trademark infringement. We thought we answered a similar question a while back but we couldn't dig it up so we assume it was written in a parallel universe.
The copyright case(s).  Bikram and his competitors have been in and of courtrooms over the past ten years. One group of yoga practitioners sought relief after Bikram sent out a bunch of cease and desist letters in approximately 2002 and 2003. That battle ended in a settlement in 2005 but not before a court weighed in on a few important issues. The court determined that: individual yoga moves could not be protected; a compilation of moves might be protected if sufficient originality could be demonstrated; even if a copyright were granted for a collection of moves, it would be a "thin copyright" and would likely be limited to performing the moves in the exact sequence; and the performance of yoga moves did not necessarily amount to their publication. As for the use of heat as part of the sequence -- and who wouldn't want to be in a yoga room packed with half-naked sweaty people -- no protection can be granted for this "concept." In September of this year, Bikram started up again, this time going after YTTP for copyright and trademark infringement. Bikram has received several copyrights for books and other compilations. However, the Copyright Office announced last week that yoga moves are not eligible for copyright protection. Bikram's lawyers discounted that decision as meaningless because Bikram's copyright has already issued and is presumed valid. It's true that there is a presumption of validity associated with a copyright registration but it's a rebuttable presumption and courts periodically eighty-six registrations when the situation calls for it. This may prove to be one of those situations.
Can you use the trademark? Probably, the strongest claim that Bikram can make is for trademark rights -- specifically as to the use of the name, Bikram Yoga. Bikram hasn't made the mistake of Pilates and permitted the unlicensed use of his name. So, if he can demonstrate that the Bikram marks (and we're not sure what is claimed beyond the name)  have been used, he may be able to succeed on trademark infringement claims.
Can it be patented? We don't think a collection of yoga moves is patentable, an opinion shared by other patent practitioners and by the patent office, although it is possible to obtain patents on yoga products, like the yoga gloves and shoes, shown above). (And of course let's not make the sad journalistic mistake of confusing copyrights and patents.)
Bottom Line Dept. If we were a betting blog, we would bet that Bikram will fail in his current copyright case though we doubt if that will deter the celebrity attraction that is associated with his "brand." The takeaway point, however, is that, until stopped by a published court ruling, the company is likely to continue to aggressively "protect" its turf.