Can I Avoid Infringing By Making Book Public Domain? 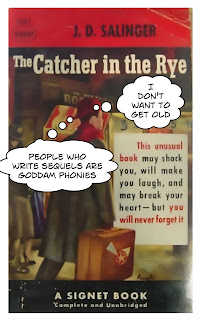 Dear Rich: An author writes a book about a band – we’ll call it ROC STAR. The author sells the movie rights, to a studio. The studio makes a movie – which carries the same name as the book and the band – but from THEIR screenplay, which differs from the original book, in that they change the names of the characters. The original author – who apparently still owns the rights to the story, the title, and the name of the band – writes a sequel to the original book. A second author writes a book, inspired by the movie, and which is blatantly a ‘derivative work’. It is about six different characters who form a different band, which is discovered by the members of ROC STAR (the band from the original story). While it is a 100% original story, the second author does mention the original band by name, as well as the original characters, but by their names in the MOVIE. It also quotes a few lines of lyrics from a song ROC STAR performed in the movie, which of course is owned by the studio. Assuming the second author (of the derivative work) is considering publishing his story, what permissions will he need, and more importantly, who does he need to request them from? My final question would be, what are the ramifications - if any - of simply putting the story into the public domain (posting it and giving it away), should I decide not to jump through all the hoops I expect are going to be presented if I try to publish it. If you don't have the rights to all the material  -- you're creating an infringing derivative work -- you don't have the legal power to dedicate it to the public. Only the copyright owner (either the movie company or the initial author) can dedicate the work to the public domain.
Does your book infringe? Possibly. You probably remember when a Swedish author was prohibited from publishing a sequel to Catcher in the Rye (even though the lead character's name -- Holden Caulfield -- never appeared in the "sequel.") We could point to other cases as well but the takeaway is that any success you may achieve will be short-lived because it's likely that once the author or movie company learn of your work, they'll try to shut it down (and you probably can't afford to fight over it). On the other hand, if the book stays low on the radar -- for example, it's posted on a fanfiction type site -- the owners may consider it "non-threatening" and allow it to remain posted in obscurity.  Because your work overlaps with fanfic, you should check out the Chilling Effects FAQs  on the topic.
Posted by The Dear Rich Staff at 6:00 AM

From our crafty friends

Someone Else is Registering My Trademark: What Do I Do?