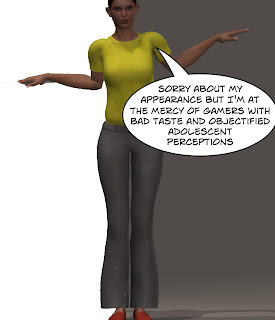 Dear Rich: I purchased some virtual clothing in a virtual world in 2007 from a content creator who is now no longer in business; the items I purchased are no longer available for sale. I'd like to make copies of the virtual clothing I purchased, and give them away, for free, to friends. I know that it's too new to be in the public domain, but since it's out of print, and for a nonprofit purpose, would it be fair use? Your question triggered so many additional questions: Does virtual clothing get dirty? What if your virtual character has a clothing allergy? Is there a virtual Good Will where you can donate your abandoned virtual clothing?
Right, you had a question. Our initial inquiry is whether copying the virtual clothing is prohibited by intellectual property laws. We doubt very much whether the clothing is protected by utility or design patents (it's unlikely considering the cost and time involved). We also doubt whether you need to worry about trademark law unless (1) the clothing had a prominently placed and valid trademark and (2) the company had not abandoned its trademark by its nonuse (you say it's been out of commish for seven years).
What about copyright? Although clothing that real people wear cannot be protected by copyright, we don't know if this rule applies in the virtual world where "clothing" is comprised of programmed algorithms and two-dimensional imagery (both protectible under copyright). So, it's very possible that the creator could claim copyright in the virtual clothing.
Can you get away with giving it away? We're always hesitant to recommend fair use as a defense and in your case, we don't think it would work anyway. You're copying the complete work and distributing it without permission. You're not doing anything transformative and you're not commenting on the work. Neither of the factors you mention -- out of print status and lack of profit (or revenue) -- would have much effect when analyzing the four fair use factors (although the lack of revenue may attract a little consideration when weighing factor  four --  effect on the potential market).
Bottom Line Dept. We think the clothing may be protected under copyright law but as long as you're not selling the clothing, or distributing it so widely as to attract the owner's attention, you probably won't run into a problem giving copies to your friends.
BTW Dept. We're not talking about "virtual clothing" as that term is used in relation to virtual fitting rooms like this or this.
Posted by The Dear Rich Staff at 6:00 AM

Email ThisBlogThis!Share to TwitterShare to FacebookShare to Pinterest
Labels: fair use, virtual