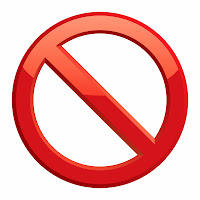 Dear Rich: A self proclaimed authority blog is using a blog link without permission (in a ban list). They have no intention of removing it despite repeated protests by the blog owner.The misuse of the blog link is damaging the "banned" blog's reputation and reducing the traffic. Kindly suggest what can be done in this situation. We're not familiar with "ban lists" but we assume you're referring to a list of blogs that are prohibited by some entity. For example, various ministries in Canada's government bans blogs because of use of language. Then, there are blogs that are banned by private companies because of their controvecontent -- for example, Tumblr bans "self-harm" blogs. It's also possible that you're using the term "ban list" loosely, referring to some arbiter of taste who lists sites that should be boycotted -- for example, a list of sites that Democrats should boycott because the owners of those sites support Republican candidates.
Links and free speech. There's nothing illegal about providing text links. Linking only creates a problem if the link is used to induce infringement, violence, or some other illegal behavior. Second, people have the right to speak freely and if they choose to speak out against others, they have the right to do so using a "ban list" ... within certain limits. If, however, someone has a ban list entitled "Blogs By Convicted Sex Offenders" and lists your blog on the list, knowing that you are not a sex offender, then posting the link is defamatory (it makes a false statement that damages the blogger's reputation) and a lawyer may be required to correct the situation and perhaps sue for damages. Dealing with a government ban list will require some bureaucratic wrangling -- you will need to research the bureaucratic procedure for appealing such government categorizations (assuming it's a government that cares about such procedures).
Posted by The Dear Rich Staff at 6:00 AM