A Perfect Day for Banana Hockey? Patenting a New Sport 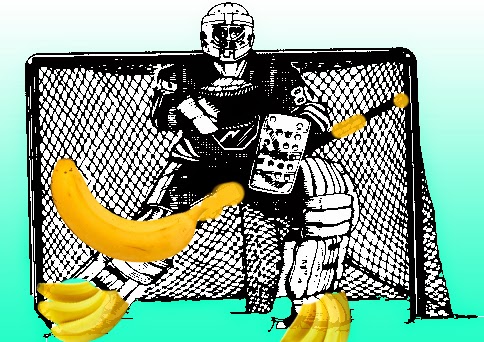 Dear Rich: Is there anything patentable or copyrightable in the equipment, rules or jargon for a new sport? Say I’ve created “Banana Hockey,” which involves skating on banana peels instead of ice, specifies using fresh bananas as pucks, requires special sticks with banana-shaped scoops. Let's say that Banana Hockey also has its own rules and jargon, which bear only a remote resemblance to those of ice hockey, e.g., a player who “shoots” a banana at a goal is known as a ‘banana caster." Is this stuff worth getting intellectual property protection for?Novelty sports like bed racing and elephant polo may benefit from IP protection but the cost of securing it is not always worth the effort ...
Can we obtain patents on the sport? It's possible to patent sports and sport methods. So, if your game is new and not obvious to others, you may be able to get a patent. But patents are expensive, and it takes more than a year for the PTO to grant one (during which time you have no patent protection). By the time you do get a patent, you will need enough funding to hire a lawyer to enforce it.
Can we get copyright protection for the sport? You won't be able to obtain a copyright on the idea of the game though you can get protection for rule books, images, theme music, etc. Professional sports owners also retain tight ownership over the right to record and broadcast games.
Can we obtain trademarks for the sport? Trademarks helped to generate $470 billion in sports revenue yearly. If you're intending to sell merchandise, you should seek a federal registration. But, here's the catch: you can't obtain a federal registration until you use your sports trademarks in commerce.
Bottom line: IP protection can help protect your turf ... but there won't be any turf to protect without a marketing budget and fan loyalty.

Email ThisBlogThis!Share to TwitterShare to FacebookShare to Pinterest
Labels: sports