Can They Make Me Give Up Domain Name? 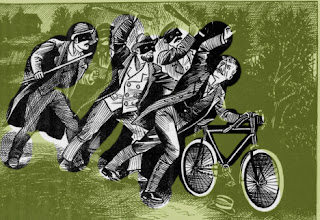 Dear Rich: I have an LLC (and domain name) and they have been in continual operation/use since 2011. The name of the LLC and domain name are the same. I never applied for a trademark. Recently a company sent me a letter saying they were just issued a trademark for the name; they would pay me $300 and if I refused they would force me to give up the domain name. It looks like they filed for a trademark in 2013 (At least 2 years after my first use of the name). What are my options and can they force me to give-up my company and domain names? A preliminary question is whether you offer similar goods or services to the other company. If you don't -- for example, they offer massage tables and you provide pet bereavement counseling -- then the other company will have a hard time dislodging your domain. If you sell similar products, or it's likely that the other company will expand into your commercial sphere as a competitor, then things may become a little trickier (see below).
Who can make you change? Only a court, or an arbitration panel from the Internet Corporation for Assigned Names and Numbers (ICANN), can force you to give up your domain name. In general, that would happen if the other company can demonstrate that your acquisition of the domain name is in bad faith -- for example, you bought the URL in order to trade off the other company's name or with the intention to sell the domain name back to the company (cybersquatting). Having a federally registered trademark doesn't give the other company dibs on the domain name, but it is sometimes helpful when fighting domain name battles because it creates a presumption of nationwide priority. That's something you will try to rebut in an arbitration or lawsuit by demonstrating that your use of the domain precedes the other company. In the practical world, the letter you received is typically a prelude to a more serious domain name negotiation in which the other company seeks to cajole you into a sale that would be more profitable than litigating.
Posted by The Dear Rich Staff at 6:00 AM