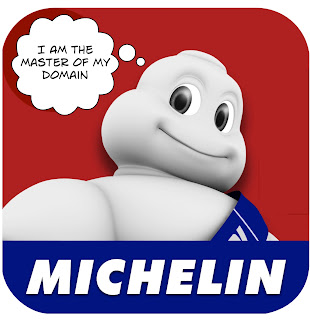 Dear Rich: Two years ago, my mother received a medical diagnosis and was expected to live about nine months to a year. In order to pass the time, and take her mind off of things, she decided she wanted to eat at all the Michelin star restaurants in London and write a blog critiquing their vegetarian offerings. (My stepfather is vegetarian and she felt this would be a fun bucket list item, that would also help people). In order to help her with her project, I bought the domain “MeatFreeMichelin.com.” I was shocked when I received a communication from Michelin’s legal representative saying that I was running the site in bad faith (he’s basing this on the fact I didn’t respond to the email he sent – I didn’t see it because it went to junk mail) and has started proceedings to seize the domain. He also threatened I would have to pay attorney’s fees - all for a site that was put up for fun- with no commercial interest- that used very little other than the name. The site didn’t look anything like Michelin’s, no logo’s were used, we did not imply that we had any kind of sponsorship and my mother chose the Michelin name because that’s how she decided which restaurants. In other words there was little other way to identify them. We believe this was fair use. However, even though we believe we are right with the fair use part -- and I have taken down the site as a precautionary measure -- we are still getting communications from Michelin’s attorney who continues to ignore our repeated requests that he explain why this is not fair use.
The Michelin attorneys have brought an action to cancel your registration of the domain using arbitration procedures established by ICANN, the organization that oversees domain name control. Under these procedures, Michelin can only cancel the domain if it demonstrates to an arbitrator that you acted in bad faith. The company has filed a complaint dated October 2, 2015 and you have 20 days to file a response. The rules for responding are explained here.
Did you act in bad faith? Under the arbitration rules, four ways to demonstrate bad faith include:

We assume Michelin is basing its claim on the fourth item. Under arbitration rules, an acceptable defense is if "you are making a legitimate noncommercial or fair use of the domain name, without intent for commercial gain to misleadingly divert consumers or to tarnish the trademark or service mark at issue." Under these standards, it does not appear as if you were acting in bad faith because your mother's blog has no commercial purpose (typically, the strongest factor); there is little chance of diversion as Michelin customers are sophisticated enough to realize that the blog is not connected with Michelin (as is obvious from reading the blog's mission); and you are making a nominative fair use of the Michelin mark.
What to do? Although we don't believe you are acting in bad faith, our opinion may not matter much as such arbitration rulings are difficult to predict, often biased in favor of the complaining party, and will likely require an attorney's assistance. At the same time, the lack of a response is sometimes even used to infer bad faith as was done in Michelin's complaint ("Respondent never answered the Complainant's letter is further evidence of bad faith ..."). For that reason, if you feel strongly about asserting your rights, you should fashion and file a suitable response to be filed with the arbitrator.
On the other hand, you may be able to say goodbye to the whole thing by contacting Michelin and simply agreeing to retire the domain. As you are aware, your mother's blog can exist without the domain name. To lower your chances of being hassled over the blog, a prominent disclaimer may help -- something to the effect that the blog is not endorsed by or associated with Michelin or the Michelin Star.
Posted by The Dear Rich Staff at 6:00 AM