Can I Origami TV and Movie Characters? 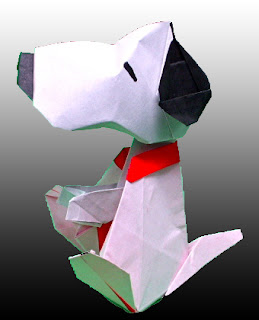 Dear Rich: Some origamists create figures that resemble characters from tv shows, movies, comic books, etc. When the diagrams to fold those figures are published in an origami book or magazine they often have a different name unrelated to the official name of the character they resemble. Is that an effective way to avoid infringement?
Renaming a character will not prevent a copyright infringement lawsuit any more than retitling a song or book. At best, it may delay or prevent the character's owner from finding the infringement and hassling you. Under trademark law, the same is true; retitling the characters with a dissimilar name will not prevent a  trademark infringement claim based on the character's appearance.
A worthy claim? But, more importantly, we're not sure that either copyright or trademark infringement is occurring, and if it is, whether a character owner would find it worth pursuing. One reason is that unlike other DIY art projects -- for example, a paint-by-numbers illustration -- the origami pattern doesn't resemble the character. (It's a little like being sued for explaining how to make a balloon version of Snoopy.)
In addition, the damages -- the economic injury suffered by the character's owner -- seem difficult to quantify because the origamist is not selling copies of the origami characters or products containing the character (which are more likely to trigger legal action). At best, if the origamist publishes a photo of the origami character, that may give rise to a derivative copyright claim ... but again, the lack of substantial damages and the tenuous legal case probably preclude any real problem over that. In short, it's possible, but unlikely that the origamist will get hassled.
P.S. Dept. We've written about origami in a previous post ... and here's some origami legal news!
Posted by The Dear Rich Staff at 6:24 PM