How Are 'Territory' and 'Publication' Defined? 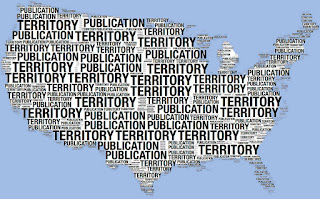 Dear Rich: I work as the Permissions Coordinator for my company, and we have received many agreements for use of excerpts and articles in various publications over the past few years. Now we are trying to ascertain if we are legally permitted to sell/distribute our publications to customers abroad. Each rightsholder seems to have different verbiage when it comes to territory - running the gamut between "territory: North America" and "territory: publication in the United States" to "territory: publication and distribution in the United States." The last one is clear, but how are "territory" and "publication" legally defined in the copyright industry - is "distribution" implicit when only publication is mentioned?
Ideally every copyright license should include: a "grant of rights" that explains what you can do with the copyrighted work; a "term" which provides the period of time you can exercise the rights; and a "territory" which describes where you can exercise those rights. Often these three provisions are merged into one or two clauses, as seems to be the case with some of your agreements. (When we say"copyright license" we're talking about any temporary grant of copyright -- for example a permission agreement.)
Publication includes distribution. Publication is assumed to include distribution unless the agreement provides otherwise. This jibes with trade practice and the copyright law definition of publication -- "the distribution of copies of a work to the public by sale or other transfer of ownership, or by rental, lease, or lending."
Territory clauses. Territory is assumed to be a geographic area --  for example, "the United States" or "North America." In publishing contracts, territory is often tied with language restrictions-- for example you may be granted publication rights of an article and the territory is defined as "English and French language rights for North America." In that case, you could distribute in Mexico, but not a Spanish language version. It's also possible that your books may end up outside the territory --  for example, Amazon.com fulfills an order, or a third-party buys a carton of books and takes them out of the territory for resale. That won't violate the agreement but what you can't do is engage a distributor who carries your book outside the territory, or sublicense to a publisher outside the territory.
Interpreting contract language. What happens if there is a dispute about interpreting "distribution," "territory," and "publication"? Absent definitions within the agreement, a court when examining contract language, will usually seek out the "plain meaning" of the words--that is, how a reasonable person in the publishing industry would interpret them.
Posted by The Dear Rich Staff at 9:08 AM