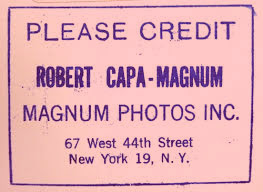 I have a film of D Day that I had copyrighted last year. My project with this film is to add some photographs that first appeared in LIFE magazine on June 19, 1944. They were taken by employee/contractor Robert Capa. These same photographs were then published in a book, "Invasion" and copyrighted by LIFE Magazine in 1944. I have both the original magazine and the original first edition of the book. Magnum Photos is trying to let me think they own the copyright for these photographs, with the belief they included them in a compilation of Robert Capa's photography. Are these in the public domain? Capa was employed by LIFE on June 6, 1944 and he died in 1954.

We believe that the owner of copyright of Robert Capa's D-Day photographs is either (1) the estate of Cornell Capa, (see copyright notice under photo) or more likely,  (2) the International Center for Photography (see copyright notices under photos). The ICP was founded by Cornell Capa, Robert's younger brother. In any case, licensing rights are controlled by Magnum Photos. (The Library of Congress appears to validate this conclusion.) Magnum's relationship with Capa runs deeper than publication of a photo compilation. Robert Capa founded Magnum Photos in 1947 with Henri Cartier-Bresson, David Seymour, George Rodger and William Vandivert. In any case, it's amazing that Capa's eleven D-Day photos exist at all considering that a flustered Life Magazine photo lab employee destroyed 95 of the 106 photos Capa shot during the invasion.
Posted by The Dear Rich Staff at 9:25 AM