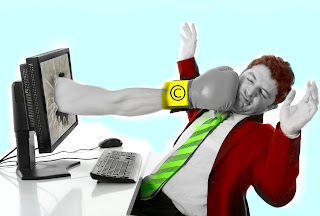 Dear Rich: I run a news aggregator that uses RSS feeds to pull in a headline, a small photo and a few lines of text. We pull content from maybe 2,000 sources. Visitors who want to read the full story click on a “read more” button and get taken back to the original source. I recently have been sued by a photographer whose photo appeared on our site. We gave the original source credit for the story and the photo, and of course we provided a link back to the original site. This photographer says I didn’t have the right to include her photo on our site. Now it looks like we might be heading to court. If I truly have done nothing wrong and if what I’m doing is considered fair use – whatever that is – why should I be punished or even subjected to all this? My site is relatively new and I have put significant money into the enterprise. I need time to build this up, and now I’m being threatened. I have tried to reach the publication that published the photo to see if it can shed more light on this, but nobody answers my emails or voice messages. It’s a big publication; it’s hard for me to believe they didn’t have the rights to publish on the Internet.
We don't believe it matters whether the big publication had permission to publish the photo. If they did have permission, it wouldn't extend to you. If they didn't have permission, you're still in the same pickle.
So, how do aggregators do it? Not all news aggregators operate from an identical model but it's generally considered "safe" -- meaning you won't hear from any lawyers -- to publish only the headline, a link back to the news source, and perhaps some original text describing the content (without reproducing it). How do news aggregators like Apple, Google and Yahoo! reproduce photos and text? These aggregators pay for permission to reproduce publications like the New York Times and the Associated Press. They don't pay smaller news sources and these publications don't object to being aggregated because they reap the benefits of link backs that result in more traffic. As you can see, a free lance photographer who reaps no financial or linking benefit from aggregation may find it more lucrative to chase infringers, especially small companies that can't afford to fight.
Making a case for fair use. We assume you used the complete photo. And we assume you didn't use it for a transformative purpose. Both of these factors make it hard to argue for fair use. If you had displayed a thumbnail of the photo, you may be in a better position. In a 2007 case, a court ruled that Google’s thumbnail reproductions of images from an adult men’s magazine website were permitted as a fair use primarily because the purpose was transformative -- the thumbnail was used for indexing and searching. (See also this 2003 case.)
What should you do? First get proof that the photographer does own the copyright. Obtain a copy of the registration and look for contradictions -- for example, she assigned the photo copyright to someone else, or the photo was a work made for hire. Second, run an image search for the photo. You should contact the websites who have also reproduced the photo to learn if they have been hassled and if so, what was their resolution?  Third, consult with a copyright attorney and ask for an estimate of your odds and your costs. (Be wary of Pyrrhic victories). Also, check your business insurance just in case the policy covers copyright infringement.