Can We Upcycle Band T-Shirts? 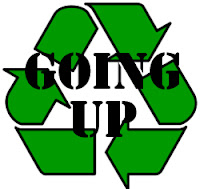 Dear Rich: In an online selling venue, we have a thread going with a discussion about upcycling a t-shirt with touring band theme designs on them. One person wants to use these copyrighted shirts to "upcycle" them into another piece of clothing or a hand bag, that they would then offer for sale. Some of us say "no" because it's still a copyrighted image on the shirt. You bought the shirt, not the image. They say since they own the shirt, they can do anything that they want with it. They say that the shirt maker bought the right to use the image, therefore, the copyright owner has already been paid. We had to look up the definition of upcycling and as far as we can tell, it's recycling but with a bigger profit margin. Like, lately we've been capturing the cold water in our shower as the water warms up. If we just dump that water on to our plants, we're recycling, but if we flavored that water, froze it, and sold it as Fair Trade Popsicles, we would be upcycling. (We think lime flavored would be best as it would have a green color.)
Right, you had a question. You should be able to re-use band touring t-shirts in clothing or in a handbag without asking for permission. Copyright law permits the purchaser of a copyrighted work to resell, destroy, or do whatever they want to that work, as long as they don't step on any of the copyright owner's exclusive rights. This principle is known as the first sale doctrine, and that's why people can sell used books, movies, and music on eBay and Amazon. The term "first sale doctrine" comes from the fact that the copyright owner maintains control over a specific copy only until it is first sold. (One exception: If it's a limited edition artwork or fine art work -- for example, signed and numbered photographs created in limited editions of 200 or fewer copies -- you can't destroy it.)
But it's not so simple. The rules are a little different once you start to disassemble or reconstruct the copyrighted object. In one case, for example, it was okay for a company to make baby bedding from a copyright and trademark protected fabric. But there is a conflicting line of cases that makes things a little confusing. In one case, a company purchased a book of prints by the painter Patrick Nagel and cut out the individual images in the book and mounted them in frames for resale. A court of appeals in California held that this practice was an infringement and was not permitted under the first sale doctrine. (Mirage Editions, Inc. v. Albuquerque A.R.T. Co., 856 F.2d 1341 (1988).) (A similar result was reached in Greenwich Workshop Inc. v. Timber Creations, Inc., 932 F.Supp. 1210 (C.D. Cal. 1996).) In a different case, a company purchased note cards, mounted them on tiles, and resold them. A federal court in Illinois determined that this practice was okay. (Lee v. Deck the Walls, Inc., 925 F. Supp. 576 (N.D. Ill. 1996.) (The same result occurred in C.M. Paula Co. v. Logan, 355 F. Supp. 189 (D.C. Texas 1973).) So, under these rulings, a person cannot rip individual images from an art book and resell them in California, but a person can mount individual note cards and resell those in Illinois and Texas. We don't think these rules will affect your activities unless you were to cut up a shirt and take two or more separate images and repurpose them on multiple products. But reusing a single shirt to create a single item of clothing or a handbag should be fine.
Beyond copyright. There are some other rules for repurposed items that contain trademarks or infringe on a band's right of publicity. Most likely these won't be an issue but to be on the safe side, you can avoid any impression that the touring band endorses the shirt by advertising the items as Handbags Made from Upcycled Rolling Stones T-Shirts instead of saying  Rolling Stones Handbags.
Posted by The Dear Rich Staff at 6:00 AM