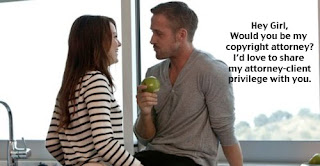 Dear Rich: I read your explanation about using paparazzi photos and it made sense. But then how do you explain the Ryan Gosling meme? I assume that most of the photos that are being used were taken by professional photographers, and I doubt if many of the web sites and Tumblr accounts that have been spreading them are paying for permission to use the images. How can you know when it is ok to use an image without getting permission? For those over-worked readers who are always late to the viral party (and perhaps still not familiar with Rebecca Black, Obama Girl, and LOLcats), the Ryan Gosling meme refers to the collection of Ryan Gosling photos that are modified with captions -- always a short statement attributed to Ryan that starts with "Hey Girl" and follows with some invitation to intimacy or a proclamation of love, devotion etc. The meme has split into various trails, including a feminist Ryan Gosling meme  and a Silicon Valley RG meme (that includes a rare patent law reference).
Hey Girl, Can You Copy Me? As for the legal rights connected with meme-ing, the Dear Rich Staff believes that if you're asking about permission to use Ryan Gosling photos, you're also probably wondering about how often you need to get your cholesterol checked. In other words, folks who meme usually don't care about no stinking badges. It's true that all of the Ryan Gosling photos are likely protected by copyright law, but for some reason we're not hearing of any copyright owners going after these folks (and Ryan, himself seems to condone the use as well -- so much for right of publicity claims). Of course, the Internet use is one thing -- and we can understand why copyright owners might be gun shy about going after a popular meme -- but the reproduction in a book does require permission (and is expensive -- scroll down to the Jan 14 blog entry). Although some copyright owners do have a breaking point, we think most of these fleeting Internet memes tend to fly under copyright radar.
Posted by The Dear Rich Staff at 8:48 AM