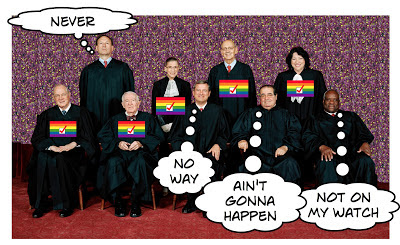 Dear Rich: I am a photographer in a same-sex marriage in California. Does the Supreme Court decision about gay marriage have any effect on my photo copyrights or my contracts with publishers? Yes, the recent SCOTUS decision does affect copyright law (and when did everything become SCOTUS and POTUS anyway?). In 1997, the General Accounting Office responded to a query from Congress about what laws would be affected by the Defense of Marriage Act (DOMA) and the GAO wrote:

In other words, if you are in California -- a state that has legalized same-sex marriage -- your surviving spouse will acquire the right to recapture copyright for pre-1978 transfers as well as the right to send and benefit from Notices of Termination.
The effect on your contracts. Other than the ability to terminate your transfer after 35 years (discussed above), the Supreme Court decision should have little effect on the contracts you signed regarding copyright transfers. Note, that in the nine states that have community property laws --Arizona, California, Idaho, Louisiana, Nevada, New Mexico, Texas, Washington, and Wisconsin -- spouses automatically become joint owners of most types of property acquired during the marriage. California, for example, has held that a copyright acquired by one spouse during marriage is community property—that is, is jointly owned by both spouses. (Marriage of Worth, 195 Cal.App.3d 768, 241 Cal. Rptr. 135 (1987).) This means that if you are married and reside in California (or later move there), any work you have created or will create automatically would be owned jointly by you and your spouse unless you agree otherwise. Therefore, lawyers consider it prudent for both spouses to sign any assignments or exclusive transfers of copyright. (Note a court in Louisiana has held copyrights are not community property in that state. (Rodrigue v. Rodrigue, 50 U.S.P.Q.2d 1278 (E.D. La. 1999).)
For more information on how the Windsor decision on the Defense of Marriage Act affects other legal rights and responsibilities, see "The Supreme Court’s DOMA Decision."
Posted by The Dear Rich Staff at 6:00 AM