Can I Use Betty White Picture in Documentary? 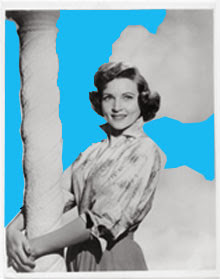 Dear Rich: My daughter is doing her first short student film (5 minutes). It's about an elderly woman who lost her husband and is continuing her life by auditioning, etc. In the film she is using a poster of Betty White, shown very briefly as inspiration for the main character. She bought the poster on Amazon. The poster does not cite any publisher or maker. Her instructors in her film program expressed concern about using the poster without permission from someone. They suggested she needs a lawyer to draft up a fair use statement. This is a student film. It is not going to be sold, nor submitted to film festivals, etc. It will only be available on an internal university platform that is passcode protected where only students can view. The instructors are threatening to remove the footage from her class film out of fear of being sued. What is the best course of action? Does permission need to be secured in this case? Who should give permission? Betty White? The producer of the poster? Both? Does having a fair use statement drawn up by a lawyer accomplish anything? Do you have an example of such a statement? Or should she just give up and delete the footage because it is too complicated at this point to figure out? We'd hate to see footage deleted, especially when it is part of a preemptive CYA academic scheme. In our humble opinion it really seems like overkill to require such an opinion for this scenario and under these conditions ... but hey, it's been a long time since we went to school and we assume that litigation crazed copyright owners have altered the academic climate. Maybe we can find a way to save Betty White!
Fair use opinions. Yes, fair use statements are often drafted by lawyers for movie companies who need them for the benefit of insurance companies. In fact, insurance companies often pre-select attorneys for these legal opinions based on their expertise and experience. Such statements provide an opinion supported by current case law.
Permission from Betty White? Betty White has the right to halt commercial uses of her image under right of publicity rules -- for example, in ads or to imply endorsement of a website. But, unless she owns the copyright to the photo, no permission from Betty White is required to use her poster for a documentary film.
Statement of Best Practices.  We think your situation is an ideal one to apply the Documentary Filmmakers' Statement of Best Practices in Fair Use (prepared by The Center for Social Media). the Statement "makes clear what documentary filmmakers currently regard as reasonable application of the copyright fair use doctrine ..." and has been accepted by numerous broadcasters as well as four insurance companies, thus simplifying the clearance practice and avoiding expensive opinion letters. You should review that document and attempt to fit your use into one of the four classes. For example -- if the subject of the film (not the documentary maker) acquired and used the poster, your daughter may make a convincing argument using the third class of situations -- "Capturing Copyrighted Content in the Process of Filming Something Else." You may also benefit by reading up on the "transformative" aspect of fair use as well as looking at some summaries of fair use cases.
If fair use does not apply ... If fair use does not excuse the use, you would need permission from the person who owns the rights to the image on the poster, typically the photographer.
Posted by The Dear Rich Staff at 6:00 AM

Email ThisBlogThis!Share to TwitterShare to FacebookShare to Pinterest
Labels: documentary, fair use, poster