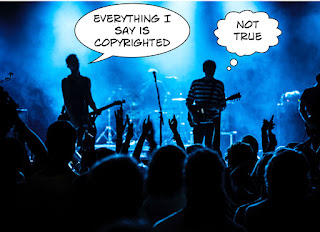 Dear Rich: We are working on a book that provides a compilation of stage banter quotes from rock concerts -- onstage quotes of famous singers and songwriters. We do not make commentary about the quotes, but some will certainly come across as flattering while others will likely come across as not-so-flattering. There are approximately 180 quotes at this point. Big note here: some quotes are culled from the Internet, most are transcribed by us (both from YouTube videos and the like and also from CD and DVD live recordings). Regarding the quotes -- are we protected under "fair use" to use these quotes in a publication for commercial gain?  Also, what about libel? And if we got the quotes from CDs and DVDs, is the content copyrighted to the extent that we cannot reproduce it via transcription? We are planning to use photos found on "Creative Commons." (We are only using CC BY and CC BY-SA photos and will credit the copyright holder.) Do we need to get a "Model Release" from each singer/songwriter to cover ourselves? Also, what about "Property Rights" of the venue in which the photo was taken?
We don't think you have much to worry about. As we've indicated before, short phrases are usually not protected under copyright law. So, copying and reproducing one, two or even three line quotes typically won't cause a problem.
Fair use? Longer quotes --  say four or five lines or more -- may be excused under fair use principles. Even though you are not providing commentary, we think the act of curating these quotes may be transformative (and it's hard to imagine that you are depriving the musician of any income by reproducing onstage banter). By the way, when you pull quotes from recordings, you are not infringing the sound recording copyright (unless you copied the recording, not the text) and you're not infringing the song copyright either.
What about libel? It's unlikely you're libeling anyone by reproducing onstage banter. You certainly wouldn't be libeling the musician who made the statement (there's no such thing as "self-libeling"). As for third parties, it's always possible that a musician's blathering may libel a third party but we imagine that these statements have already been published somewhere and nobody's objected. So that shouldn't be an issue. Misattribution may be a problem if you are attributing an awful statement to a musician who didn't make it. But that's an issue for your fact-checking department.
The photos. You should be fine using Creative Commons licensed photos assuming you abide by license conditions. You don't need a model release (or property rights permission from the venue) as your uses within your book are for editorial purposes. To sidestep all right of publicity issues, avoid using photos of celebrities in the advertising and packaging (the cover) for your book.
P.S. Hope you included Lou Reed!