Can I Use Watercolor Versions of Photos? 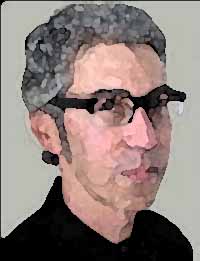 Dear Rich: I am doing a documentary on a school board desegregation lawsuit that began in 1962 and ended in 2010. Three of the attorneys are still practicing and one is a state appellate court judge. I downloaded their pictures with their bio. I then sent the pictures to a watercolor artist who made a portrait of them in an impressionistic style so there are similarities such as direction of the subject's head and direction of eyes and other features and other general similarities such that you could presume that the watercolor portrait came from the downloaded pictures. The websites where I got the pictures (the law firms and courts) are openly available on the Internet and I am going to release my documentary on the Internet completely free of charge. I was planning on having these watercolor portraits in a dedicated frame as I do a voice over about the role each one played in the case. Is this fair use? If the similarities are like those between our watercolor (left) and the unadorned version (right), then it's probably not fair use. Of course we can't say for sure because that may depend on various factors such as: how long the watercolor appears in the film (the less time, the better your outcome), the size within the frame, (smaller is better for fair use purposes) and whether the artist's modifications result in a change in perspective -- that is, a person viewing the watercolor gets a different impression of the subject than they might from seeing the original photograph. There are various cases in which artwork is modified (and a derivative is created) and the results are not considered fair use. (You can read about similar cases here).
What really matters ... It doesn't matter that the photographs are widely available on the Internet or that you are offering your documentary for free. The copyright owner (either the photographer, or the party who commissioned the picture) can still pursue you for infringement. We're not so sure that will happen as the owner may never see your work (and may not care, either). But defending fair use is not something you'll want to do. If you don't want to ask for permission, you should limit the use of the imagery to the shortest screen time possible and (if possible) limit the size so that the image fills only a portion of the screen. That may strengthen your position ... should you need to defend it.
Posted by The Dear Rich Staff at 6:00 AM