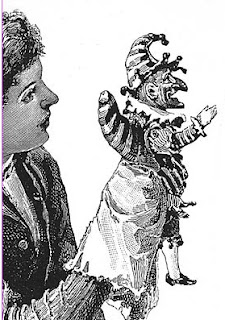 Dear Rich: I have a question about puppets! My friend and I are planning to start a YouTube channel where we upload puppet show videos we shot. Some of the puppets are completely original, hand-made. But some puppets are bought - from Silly Puppets, Sunny Puppets and some Muppet Whatnots that we customize. Of the bought puppets, some are heavily modified, some lightly modified, some just in costume changes. So my questions are somewhat progressive: (1) Do we have the right to put up videos online that use these commercial puppets? We don't want to get a large body of work done only to be later told we can't use any of it. (2) Should we list the manufacturer of the puppets in the credits? (3) If we start to get revenue sharing from YouTube from advertising (for many hits), do we have the right to that money or would the puppet manufacturers have some right to it? (4) If it someday came to the point where we were making direct money from our show idea (DVD sales, TV series, whatever), would their be legal issues and questions about claims to the profits? The short answer is that we don't know what will happen. There are too many variables to give you the thumbs up. We do know that the less success you have, the less hassles you'll endure. So, if things start taking off, you should switch to all-original and heavily modified puppets. Let's break out the factors.
PS Every time we answer a puppet question (it's only happened twice), we're reminded of our favorite Philip Roth book, Sabbath's Theater, which unfortunately we can't recommend to all readers because of its "distasteful" subject matter.