Can I Use Old Newspaper Photos and Articles? 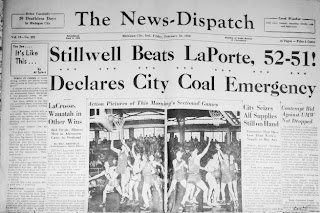 Dear Rich: I’m writing a book about basketball in 1949-50 in one Indiana county. Looking for old pictures, I reached out to the publisher of a local newspaper for help and told him exactly what I was doing. In his reply he said that was his copyrighted material, I didn't ask for permission the correct way, and he wouldn't approve of my use of any of his newspaper’s material in my book. I'm also quoting the sportswriter (who was a full-time employee) from that newspaper throughout the book. A study of old copies revealed that the newspaper never provided proper notice. I checked several dates, including the first of the series run (examples attached). Many of the pictures that were published in the newspaper turned up in private collections because the newspaper sold copies or gave them away and no copyright notice appeared on the front or back of those copies either. A retired employee of the newspaper says he took all of the pictures in question. He is still alive and indicated the paper never copyrighted anything back then. I couldn't find a record of copyright renewal by this newspaper through the copyright office, either. On another note, the newspaper's circulation has dropped 50% over the last six years. Did this material pass into the public domain as soon as it was published in the newspaper without notice? Are there any other considerations I need to be aware of? Is this an example of copyfraud? There are two ways the photos and sports articles from 1949 and 1950 would be in the public domain: if they were published without notice or if they were not renewed.
Missing the copyright notice. Prior to March 1, 1989, all works published in the U.S. had to include proper copyright notice (and for works published before 1978, the notice had to include the year). The failure to include notice resulted in the loss of copyright unless certain correct steps were taken (and such steps were rarely taken -- here's a sad story). The newspaper could have protected its photos and articles with a single copyright notice, typically placed on the title page or editorial page. That type of notice would have extended to all photos and articles. This does not necessarily mean that the newspaper owns the copyright in all of the works. It may or may not, depending on the contract with the author or photographer. But based on your question, it appears as if the sportswriter and photographer contributed their efforts as employees and the newspaper would have owned the copyright.
Failure to renew. Any work initially published in the United States in 1949 or 1950 would have lost copyright if it wasn't renewed 28 years after publication. Chances are good that's what happened to the newspaper articles and photos. According to Steve Fishman, author of several books on the public domain, the Copyright Office estimates that only about 15% of all works published during 1923-1963 were ever renewed. Assuming your Copyright Office research is accurate, the failure to renew may be the basis for claiming the work is in the public domain, although it is possible (though not likely) copyright information for the photos or articles could be listed separately by title in the records.
What about your book? If the work is in the public domain, you (and everybody else in the world) are free to use it. The biggest challenge is access, of course. The publisher's response may be copyfraud though we're not sure if intent matters (it is always possible that the publisher has simply been misled as to copyright rules). You could start by confronting the publisher with your factual determination and perhaps find out if you're incorrect -- can he demonstrate that notice was included or that issues were renewed? Also, if your book is distributed by a publisher that demands indemnity, you would be best served to have a copyright attorney sign off on the final determination.
And thanks for stirring up memories. The Dear Rich Staff worked for five years at a southern Indiana newspaper back in the 1970s!