Wants to use Vietnam Vet Photos 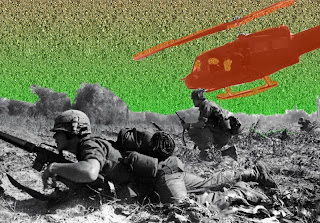 I am very interested in using the photographs from a Vietnam War veteran website in a potential art book/project. I've written the photograph manager and the webmaster of the site several times at this point without receiving a response. The photos definitely belong to vets, and I realize this would be a gross infraction of their rights, both personal and legal, but I am just curious as to what the technical "ownership" boundaries are for this kind of thing--what can be safely done with photographs posted on the internet that aren't watermarked or blatantly copyrighted? If as you've indicated, you're concerned about the personal and legal rights of the vets, you should get permission. Most likely the photos are protected under copyright law.
When were the photos published? Copyright duration is affected by when a work was first published (and to some extent when it was created). We know the photos were all created before 1976 (the Vietnam War ended in 1975) but we don't know when they were first published. "Published" means more than a limited number of copies were distributed to the public. Displaying the photos or sharing scrapbooks is not a publication. Posting on the Internet is generally considered to be a publication (assuming there is a means of reproducing or downloading the material). If all of the photos were first published on the Internet, chances are good that the works are under copyright. Here are the possibilities:


We're guessing that the first publication was on the website and that the copyright in the photos is owned by the photographer, or his estate.
Blatantly copyrighted ... Watermarking, using notice, or including copyright warnings, are not required to protect a photo copyright. Posting on the Internet without any additional statement does not terminate copyright protection. (The presence of copyright notice only matters for works first published before March, 1989.)  Finally, as for persons included in those photos, permission is not needed unless you are using their image to sell a product or service (we're not referring to your book or art project).
Posted by The Dear Rich Staff at 6:00 AM