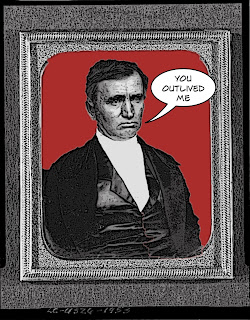 Dear Rich: I am both a professional photography and artist with over 40 years in the business. I intend to paint portraits from the 19th century of some very prominent people for a gallery exhibition. Images are held in the the Library of Congress. Many have "no known copyright restrictions" labeling. In many cases the original photograph (from daguerreotype to albumen prints and on) exists in their collection or in the National Archives, which should mean something like "held in public trust" - paid by the public taxpayers. Often there is no clause as the image being in the "public domain". Most of these images have been repeatedly published constantly since then bringing up the issue of book publishing and their use of copyright. However because of their historical interest and duplicate copies made at the time and since many reside in private collections. So far I have not found a copyright permission form on the LOC website. I know from my experience and research that my project falls under doctrines of transformative use, but there is the transformative issue in Rogers vs Koons, but not in Dyer vs Napier. What is your estimation on the potential of copyright infringement on the use of these specific portraits? Unfortunately I cannot go into more detail publicly. I would appreciate a response as this project is time sensitive and I cannot afford to hire a copyright attorney at this time. Time sensitive? Okay let us finish our herbaggio sandwich and we'll get right to it. As you may know from reading our posts, copyright duration is affected by when a work is first published (and to some extent when it was created). "Published" means more than a limited number of copies were distributed to the public -- for example, printed in a book, magazine, or on postcards. Displaying the daguerreotype prints in a museum is not a publication. Posting on the Internet is a publication if there is some way of downloading or reproducing the posted content. Determining public domain status is a matter of plugging the dates into this public domain chart.
How can I tell when the work was first published? Let's be real -- you probably won't be able to determine first publication dates. However you can probably make a few assumptions. The only way a work from the 19th Century would still be protected would be if it (1) was first published after 1977 and before 2003, in which case the work is protected until December 31, 2047 (notice is required for works first published before March 1989), or (2) was first published after 2002 and the photographer died after 1943. There are some other possibilities for continued protection and you can figure them out using the public domain chart. But generally, these scenarios are fairly unlikely. As you're also aware, the Library of Congress makes an effort to explain copyright status -- for example, as with this collection of daguerreotypes and with this general explanation.
What should you do? Your references to case law are impressive but unnecessary. Your use of the photographs may be transformative (we're not so sure) but you won't want to be dragged into court to prove your point. And more importantly, whoever dragged you into court would have to (1) qualify as owner in the face of the public domain rules and (2) show a clear chain of title dating back to the 19th Century. That is, to sue you, a copyright owner would have to prove that the rights descended through inheritances, or were passed along to the owner through a series of copyright assignments. If anyone has heard of copyright holders asserting such rights in 19th Century photographs, let us know ... but until we hear otherwise, the risk of creating portraits seems fairly low.
Posted by The Dear Rich Staff at 6:00 AM