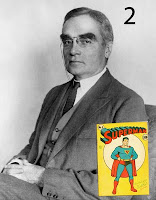 Tell It To The Hand! More on the Reiss case. Yesterday we mentioned that James Joyce's Ulysses was released within a year of Judge Learned Hand's decision in the Reiss case. What we forgot to mention was that 13 years later, Judge Hand was on a three-judge panel that ruled that Ulysses was not obscene. The decision was written by Augustus Noble Hand, Learned's cousin, also a federal judge. (The third judge on the panel dissented, making this a two-Handed decision.) The cousins apparently shared an expansive view of the arts. Augustus wrote: "Art certainly cannot advance under compulsion to traditional forms, and nothing in such a field is more stifling to progress than limitation of the right to experiment with a new technique." Here here!
The L-Man Goes to Hollywood.  In the mid-1930s, Learned Hand visited Hollywood and watched a movie production. He later wrote of his experience for the Harvard Alumni Bulletin:


"Who could resist the inspiration of the magic by which light and sound were converted into some other essence, instantaneously transported, and made permanent upon a tiny celluloid strip? When one reflected upon the years of devotion and ingenuity, of seething imagination, and of patient verification which lay behind these results, it seemed an honor merely to be one of a species which could do such things."

As much as he appreciated the 'medium,' he was baffled at the 'message,' and considered most popular films to be "tawdry, trite, dreary, and childish." He asked:


"Of what value is it to scale the heavens, to descend to the bowels of the earth, to practice alchemy and all the necromancer's art, if the end were to be so pitiful as this?"

Good question L-Man and we're only glad that you didn't live long enough to see Jersey Shore.
National Comics v. Fawcett Publications, Inc. Learned Hand was no fan of comics (he viewed the Superman strips as "silly pictures" -- a view shared by cousin Augustus who, in another case, referred to these comics as "poor thing but mine own") but Hand influenced copyright law and modern culture when he pulled Superman from the public domain. It was 1952 and the legal battle between Captain Marvel and Superman had been going on for such a long time (12 years) that the super hero stories seem to have become intertwined (Was Lex Luthor a copy of Marvel's villain Dr. Sivana or vice versa?) The previous year, Captain Marvel had triumphed at trial -- not because he was original (the trial court ruled that he infringed Superman) -- but because Superman's owners had failed to include proper copyright notice on several strips. Under the 1909 Copyright Act, if you failed to include proper notice, you lost copyright. So, U.S. copyright law had done what kryptonite could not -- dooming the Man of Steel to an unprotected life in the public domain.

Poor Thing But Mine Own. As a general principle, Hand believed that technical pitfalls should not trump personal rights. In National Comics, Hand was able to combine that precept with a copyright principle he had pioneered two decades earlier in Nichols v. Universal Pictures (which we'll talk about  later this week). In Nichols, Learned Hand introduced the then-revolutionary idea that a character within a work could achieve copyright protection separate and apart from the underlying work. Learned Hand reversed the trial court and in a wise bit of judicial surgery, held that the improper notice only doomed certain Superman strips to the public domain, not the Superman character. He wrote, "The absence of any notice, or the affixing of an imperfect notice, upon one strip had no effect upon the copyright upon another strip depicting a different exploit."

Bare-faced infringers. Hand's decision prevented a "bare-faced infringer" (Captain Marvel) from profiting and prospering because of a technical forfeiture. (Hand later took this approach even further in Peter Pan Fabrics, Inc. v. Martin Weiner Corp., his final copyright decision where, in a flash of judicial activism, he prevented a fabric design from falling into the public domain because of a lack of notice.) When Hand decided National Comics, the United States was the only country in which copyright was forfeited if no notice was provided. In that sense, National Comics was 40 years ahead of its time.  In 1989, the U.S. gave up the ghost when Congress changed the law and ended this unjustifiable requirement. Thanks Judge.
Posted by The Dear Rich Staff at 6:47 AM