What is "Original" under Copyright Law? 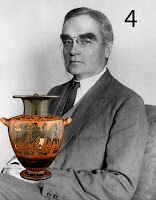 Tell It To The Hand! In 1910, one year after being appointed as a district court judge, Learned Hand issued an injunction preventing the French aviator Louis Paulhan from making flights within the U.S. At issue were patents for the airplane’s rudder, owned by the Wright Brothers. The defendant argued that the flying machine's rudder was not novel. Judge Hand disagreed, dryly noting mankind's previous difficulty in becoming airborne.


"The number of persons who can fly at all is so limited that it is not surprising that infringers have not arisen in great numbers."

Responding to the issue of whether the rudder was novel or obvious at the time of its invention, Hand said:


“Many great inventions are of this character, and the reason why the ordinary man does not discover them although they are so plain when some one else has done so is that habit has limited his power to see what he has not been accustomed to see, and his selective attention is fast bound by his past experience.”

Two for One. In an effort to further drive down our dwindling readership, we’re going to include two of Hand’s copyright decisions today, both discussing the standard of originality.
Arnstein v. Edward B. Marks Music Corp (1936) This case is the first of five lawsuits for copyright infringement brought by songwriter Ira Arnstein over a ten-year period, most of them based on a semi-paranoid notion that famous songwriters (or their agents) had stolen Arnstein's songs by various nefarious means (including breaking into his apartment). Although not labeled as a vexatious litigant (the term hadn’t been invented then), one judge did chastise Arnstein for his “persecution mania.” (The last of the Arnstein cases was brought against Cole Porter and set the standard for summary judgment in copyright cases.) Several of the Arnstein cases are described in detail here, along with relevant sound clips.
In Arnstein v. Edward B. Marks Music Corp, Arnstein believed his melody for “I Love You Madly” had been stolen and used in defendant’s song, “Play, Fiddle, Play.” The similarities apparently were driving Arnstein mad, as he stated under oath, "I was desperate. I heard my song being played everywhere, and I was starving. I was out of my mind and might have committed murder.” Arnstein lost at trial and on appeal, he used various means to attempt to show similarities between the two songs. Alas, he misjudged Judge Hand’s knowledge of musical composition. Hand wrote:


"The second phrase of the chorus has no resemblance whatever to the next phrase of the song, but if one takes some notes of the treble in the accompaniment, moves them to the melody, raises them an octave, and cuts short the resulting melodic phrase, an identity can be made to appear. When the two songs are played the phrases show no resemblance, at least to the untrained ear. To a mind already set to find piracy, this of course seems proof strong as Holy Writ, but it is really of no significance.”

In truth, Hand did not have much affection for either composition – he referred to the lyrics of the defendant’s work as “the kind of treacle which passes in a popular love song” -- and believed pop music was an arbitrary and unpredictable business. After demolishing the plaintiff’s claims, Hand observed, “Success in such music as this is by no means a test of rarity or merit; it is a commonplace that the most experienced are usually unable to tell in advance what will hit the public fancy and what will not. Were it otherwise much waste could be avoided.”

Sheldon v. Metro Goldwyn Mayer (1936). The owners of the play, Dishonored Lady, sued the makers of the movie, Lettie Lynton, for infringement. Both works were based on a true story about a Scottish woman who was accused of poisoning her lover. The trial judge had determined there was no infringement, perhaps influenced by the fact that none of the play’s dialogue had been lifted. Judge Hand reversed:


“The play is the sequence of the confluents of all these means, bound together in an inseparable unity; it may often be most effectively pirated by leaving out the speech, for which a substitute can be found, which keeps the whole dramatic meaning. That as it appears to us is exactly what the defendants have done here; the dramatic significance of the scenes we have recited is the same, almost to the letter. True, much of the picture owes nothing to the play; some of it is plainly drawn from the novel; but that is entirely immaterial; it is enough that substantial parts were lifted; no plagiarist can excuse the wrong by showing how much of his work he did not pirate.”

Hand continued with a statement familiar to most students of copyright:


"If by some magic a man who had never known it were to compose anew Keats's Ode on a Grecian Urn, he would be an "author," and, if he copyrighted it, others might not copy that poem, though they might of course copy Keats's."

In other words, copyright does not protect against similarities, it protects against copying. The Sheldon case also led to another important copyright standard known as the Sheldon Rule, and we’ll discuss that in tomorrow’s final entry. Thanks Judge.
Posted by The Dear Rich Staff at 6:00 AM