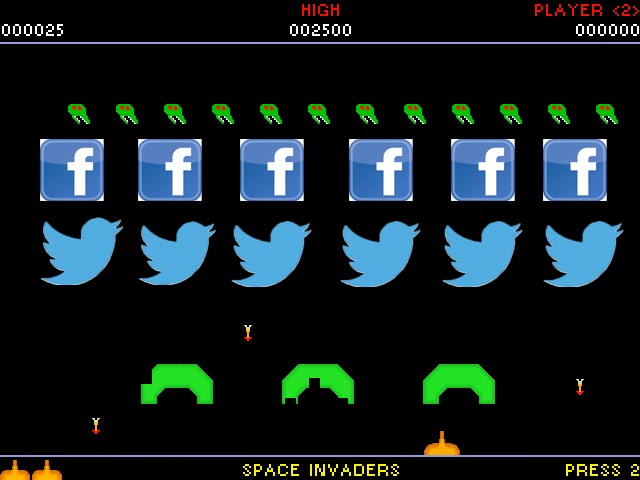 Dear Rich: I have a client who is making an online/iphone game and in the game, the player will get a fictitious email from Facebook or Twitter with some info. Can they use those logos/trademarks in their game? They are filmmakers and I know they can use it in their film, but what about the game? Can they put a disclaimer that says those companies are not endorsing their game? We can't tell you whether you would get sued (although we think the chances would increase if the game becomes popular) and we can't tell you whether you would win your lawsuit (although we doubt your client wants to pay to find out). What makes the outcome so difficult to predict is that the law regarding trademarks in video games is complicated, and in any case, the use you're describing doesn't match neatly with video game case law (or as lawyers would say, your situation is "not on all fours" with other cases).
Video game standards. When a video game maker uses an unauthorized trademark within a game, a court weighs free speech and trademark rights by asking two questions: (1) Is the trademark artistically relevant to the video game? and (2) Would consumers find the use to be explicitly misleading as to the source of the game? In a recent case, two video game makers battled over the use of "Delta Force." A court applied the test and ruled that free speech permitted the use because the military use of the term "Delta Force" preceded the use by the trademark owner. In another case, the makers of Grand Theft Auto were permitted to use the trade dress and similar trademark of a Los Angeles tavern on first amendment grounds. In a third case involving the Bell helicopter trademark, a court would not permit the use in a video game under free speech rules, claiming that consumers might be misled as to Bell's involvement with the game. This article explains the rules and cases.
What about your use? The primary difference -- and what makes your case hard to call -- is that your client is using the trademark of a company that distributes video games (Facebook) and another company that provides video game feeds. (The other cases mentioned above don't involve the names of game-making companies -- they  involve third party trademarks for a bar, military battalion, and helicopter company.) It is a little bit as if an Xbox game were to include a fictitious character using a Playstation. Would Nintendo object? On the other hand, if we analogize to movies, we don't see any problem using fictitious Twitter or Facebook accounts in a feature film. In summary, (1) we think your lawsuit meter will go up if you create an iPhone game that incorporates prominent app trademarks, and (2) the law is not clear on whether your client's use is misleading. Don't Forget Apple. Also, be aware that Apple and other App store administrators have the right under their upload/license arrangements to remove apps that violate their intellectual policy rules. Apple's rules state your game cannot "violate, misappropriate, or infringe any Apple or third party copyrights, trademarks ..." So a complaint from Facebook may result in the temporary removal of the game.
What about the disclaimer?A disclaimer by itself is unlikely to shield you from a lawsuit (although it may mitigate your damages and demonstrate you were acting in good faith). To be effective, it must be prominent, distinguishable from other explanatory or merchandising copy, and appear near, or in connection with the unauthorized use. For example, in a 1998 case involving the use of Godzilla trademark in connection with a book, a court discounted the publisher's disclaimer as being inappropriate and stated that an appropriate disclaimer would have been: “The publication has not been prepared, approved, or licensed by any entity that created or produced the original Toho Godzilla films,” and the court suggested that the disclaimer would be printed on the front cover and spine of the book in a distinguishing color or typestyle.
Posted by The Dear Rich Staff at 6:00 AM