Does Your Chewing Gum Lose its Flavor in Canada?


Dear Rich: Is the song "Does Your Chewing Gum Lose Its Flavour (On the Bedpost Overnight)" in the public domain in Canada? 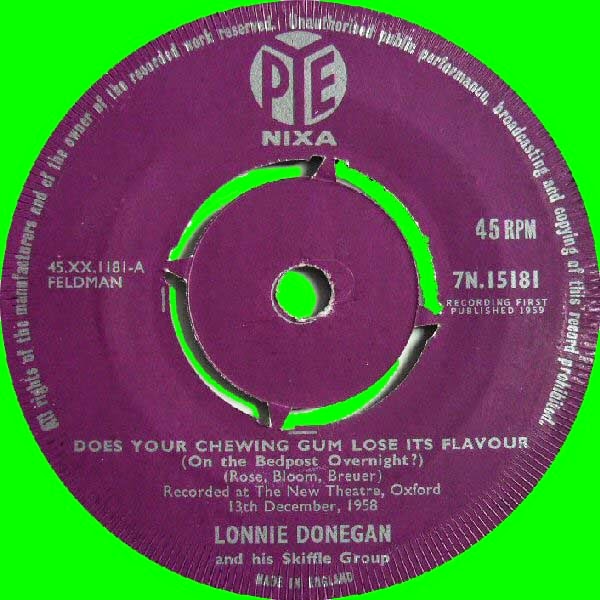 Although many music fans believe that Does Your Chewing Gum Lose its Flavour originated with Skiffle-master Lonnie Donegan in 1959, the novelty song was originally released in 1924 by the Happiness Boys. It was written by Billy Rose, Ernest Breuer, and Marty Bloom (see label, right) with one difference; their song was titled Does Your Spearmint Lose its Flavour. Donegan changed it because the BBC would not play songs that included trademarks and SPEARMINT was a registered trademark for a brand of chewing gum. (BTW, the same now-outdated policy is why the Kinks' song "Lola" references "cherry cola," instead of Coca-Cola, and why Paul Simon's track Kodachrome ended up as the B-side of a single in the UK.)
Right, you had a question. Neither the original version of this song nor the later arrangement by Lonnie Donegan are in the public domain in Canada. Copyright terms in Canada generally last for the life of the author plus 50 years. In the case of multiple authors, the term is measured from the year the last living author died. Billy Rose died in 1966, Marty Bloom in 1974, and Ernest Breuer in 1981 (according to this article ). Thus, the Canadian copyright term for Does Your Chewing Gum Lose Its Flavour runs through the end of the year 2031. Lonnie Donegan died in 2002, thus the Canadian copyright in his arrangement lasts through 2052. Answered by Stephen Fishman, author of The Public Domain.