All the News That's Fit to Recite With Music 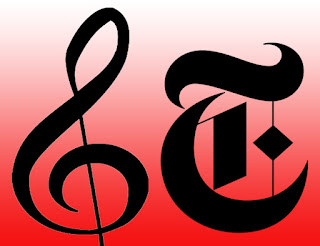 Dear Rich: I'm a musician who composed a piece of instrumental music inspired by a 1995 New York Times article. When performing the music, there is a section during which I recite 110 words of the 2,443-word article. I am familiar with the Gerald Ford case, and I don't believe the text in question would stand out as the "heart" of the story. When I perform the piece, I tell audiences the source of the text. I'm now planning to record it, and credit for the text will be noted in the attendant printed material.  Does this sound like fair use? If not, what do I do? Pay for a reprint?
We think your work qualifies as "fair use" (as explained below). If the New York Times finds out about your use, we hope their lawyers agree with our analysis and leave you alone. But if they don't, they can file a lawsuit and make you prove your right to fair use. That could quickly turn into a battle of financial attrition in which your legal rights take a backseat to your bank account.
What about asking for permission? We believe that you're performing, editing, and adapting the article to a new medium, so pursuing reprint rights won't help. The Times doesn't seem eager to encourage adaptations like yours.

You can try asking the Times for clearance. If they entertain your request, expect to pay a fee of more than $200. If the Times turns down your request, you'll find yourself in an awkward position because the newspaper is now aware of the details of your work. That doesn't prohibit you from using the article and claiming fair use (as this Supreme Court case indicates).
Is it fair use? Juxtaposing text from a New York Times article with original music gives the text a different character, a new expression, and "new aesthetics with creative and communicative results distinct from [the original work]."(Cariou v. Prince). There are other factors to consider when a judge determines fair use but as the Supreme Court stated two decades ago, "[t]he more transformative the new work, the less will be the significance of other factors." Nonetheless, two of the other three factors lean in your favor -- the amount and substantiality of the portion taken (4.5%, and it's not the heart of the work), and the effect of the use upon the potential market (what potential market is there for a 23-year old news article?). BTW, the Gerald Ford case was primarily about the right of first publication which doesn't apply to your situation.
What should you do? We want you to achieve your musical vision and we want you to stay out of court. As for the latter, here are some things to consider.

Posted by The Dear Rich Staff at 5:00 AM

Email ThisBlogThis!Share to TwitterShare to FacebookShare to Pinterest
Labels: fair use, music, newspaper