Wants to Use Netflix Series for Language Course 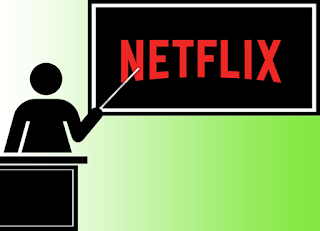 Dear Rich: I am starting a language coaching business, and I would like to create a language class and discussion group around a foreign language Netflix show. The participants would watch the show on their own via their own Netflix account. I would create quizzes, character descriptions and discussion questions around the show. Are there any legal concerns with this idea in general?  Would it be OK to mention the show by name in my ads/promotions for this class? And is there anything I can't/shouldn't do in my promotional materials? (I'm assuming using the show's logo/images is not OK.)
From the Sopranos to Star Wars, TV and movie companies have tolerated and even encouraged courses built around their shows. On the one hand, these companies welcome the publicity but on the other, they're vigilant about fans who borrow too much from the show and commit copyright or trademark infringement (as did the authors of "guides" to Seinfeld and Twin Peaks).
What can you do? Although some course creators freely use logos and imagery, you'll lower your risk of being hassled by not reproducing them. You can include the name of the show in your materials, but you should also include a prominent disclaimer, such  as, "THIS COURSE IS NOT AFFILIATED WITH, OR ENDORSED BY NETFLIX OR THE PRODUCERS OF [NAME OF SHOW]" (See section 1(a)(ii) of this Godzilla case for an example of an ineffective disclaimer.) One thing that's in your favor from a copyright point-of-view is that you're using the show for a different purpose -- teaching a foreign language -- than the show was intended. That may bolster your claim of fair use. Finally, Netflix appears open to educational uses, so you may want to pursue permissions, but beware that by asking them for permission, you would be alerting the people who, for whatever reason, may try to shut you down.
Posted by The Dear Rich Staff at 6:42 PM

Email ThisBlogThis!Share to TwitterShare to FacebookShare to Pinterest
Labels: educational, fair use, Netflix